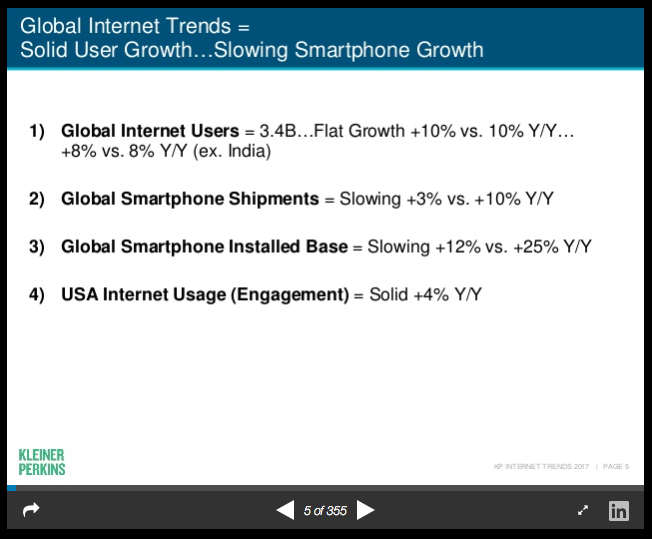 The main question that popped into my mind was, where are the rest of the people? Today there are 3.4B internet users where the world has a population of 7.5B. It could be interesting to see who are the other non-digital 4 billion humans. Interesting for reasons such as understanding the growth potential of the internet user base (by the level of difficulty of penetrating the different remaining segments) and identifying unique social patterns in general. Understanding the social demographics of the 3.4B connected ones can be valuable and a baseline for understanding the rest of the statistics in the presentation.

Another interesting fact is that global smartphone shipments grew by 3% while the growth in smartphones installed base was 12% – that gap represents the slowdown in the worldwide smartphone market growth and can be used as a predictor for next years. 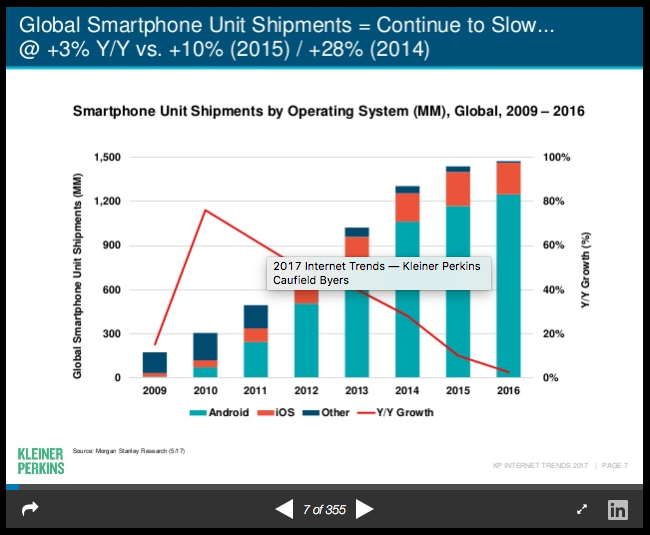 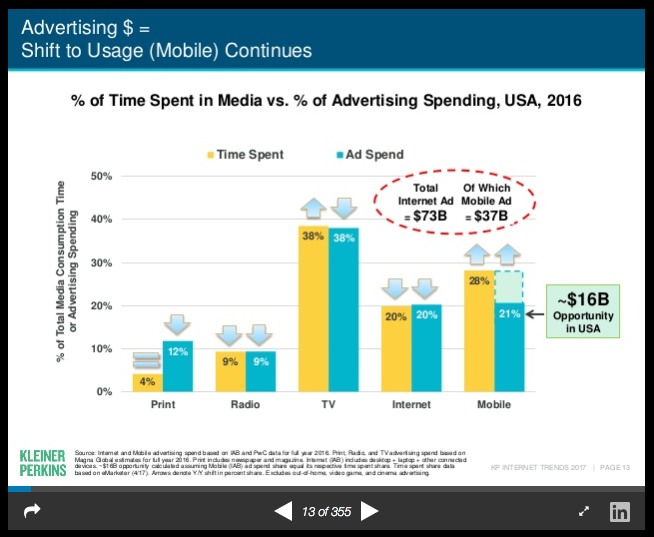 The gap-fill of ad spend vs. time spent in media across time follows the physical law of conservation of mass nicely. Print out, mobile in. 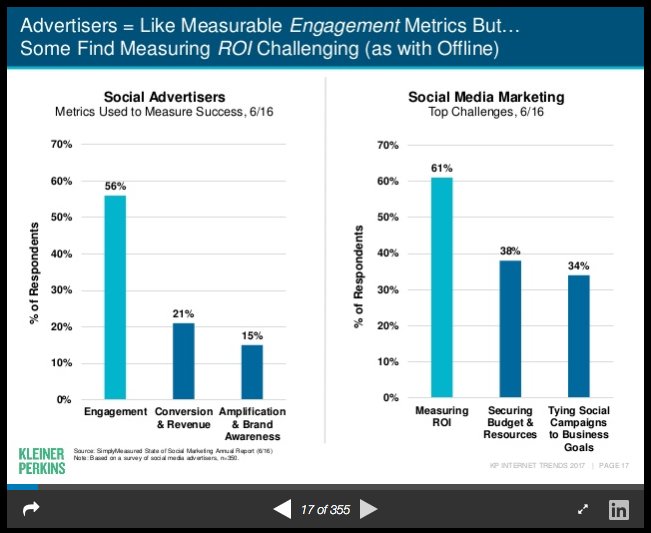 Measuring advertising ROI is still is a challenge even when advertising channels have become fully digital – a symptom of the offline/online divide in the conversion tracking, which has not been bridged yet. 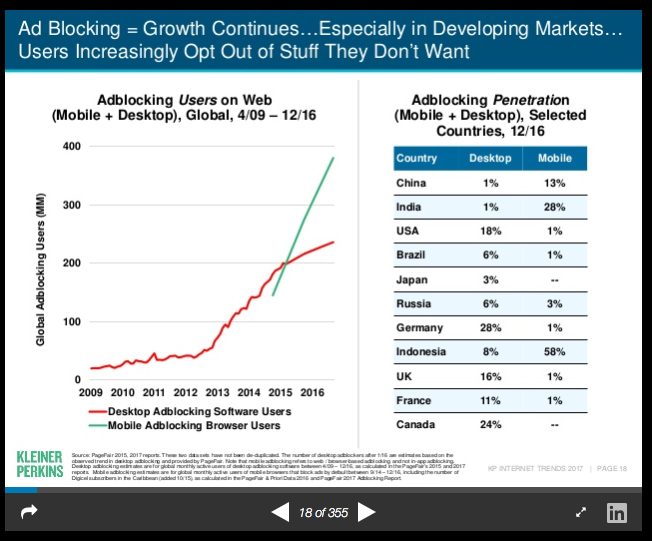 It seems as if there is a connection between the massive popularity of ad blockers on mobile vs. the advertising potential on mobile. If it is such, then the suggested potential can not be fulfilled due to the existence of ad blockers and the level of tolerance users have on mobile, which is maybe the reason ad blockers are so popular on mobile in the first place. 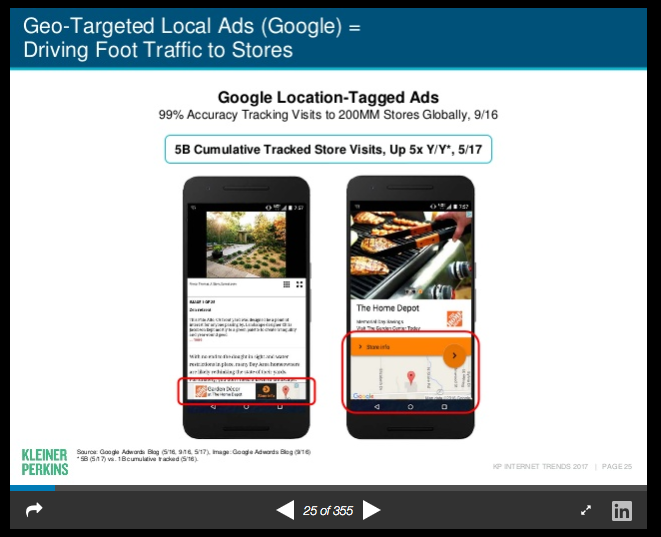 99% accurately tracking is phenomenal though the question is whether it can scale as a business model – will a big enough audience opt-in for such tracking and what will be done about the battery drain resultant of such monitoring. This hyper monitoring, if achieved on a global scale, will become an exciting privacy and regulation debate. 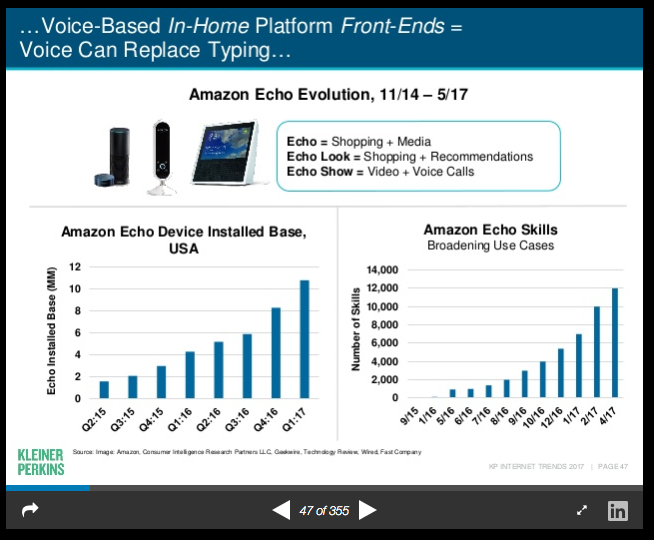 Amazon Echo numbers are still small, regardless of the hype level.

It could be fascinating to see the level of usage of skills. The number of skills is impressive but maybe misleading (many find a resemblance to the hyper-growth in apps). The increase in the apps world was not only in the number of apps created but also in the explosive growth in usage (downloads, buys) – here, we see only the inventory. 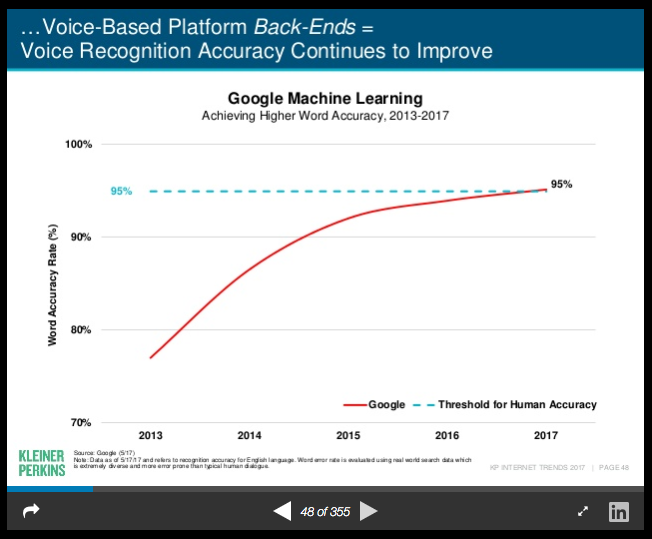 This slide shows a turning point in user interfaces and will be reflected in many areas, not only in the home assistants market. 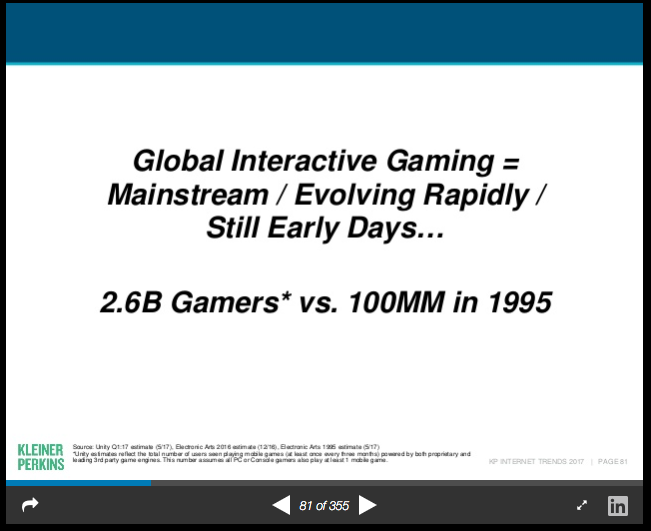 2.4B Gamers?!? The fine print says that you need to play a game at least once in three months, which is not a gamer by my definition. 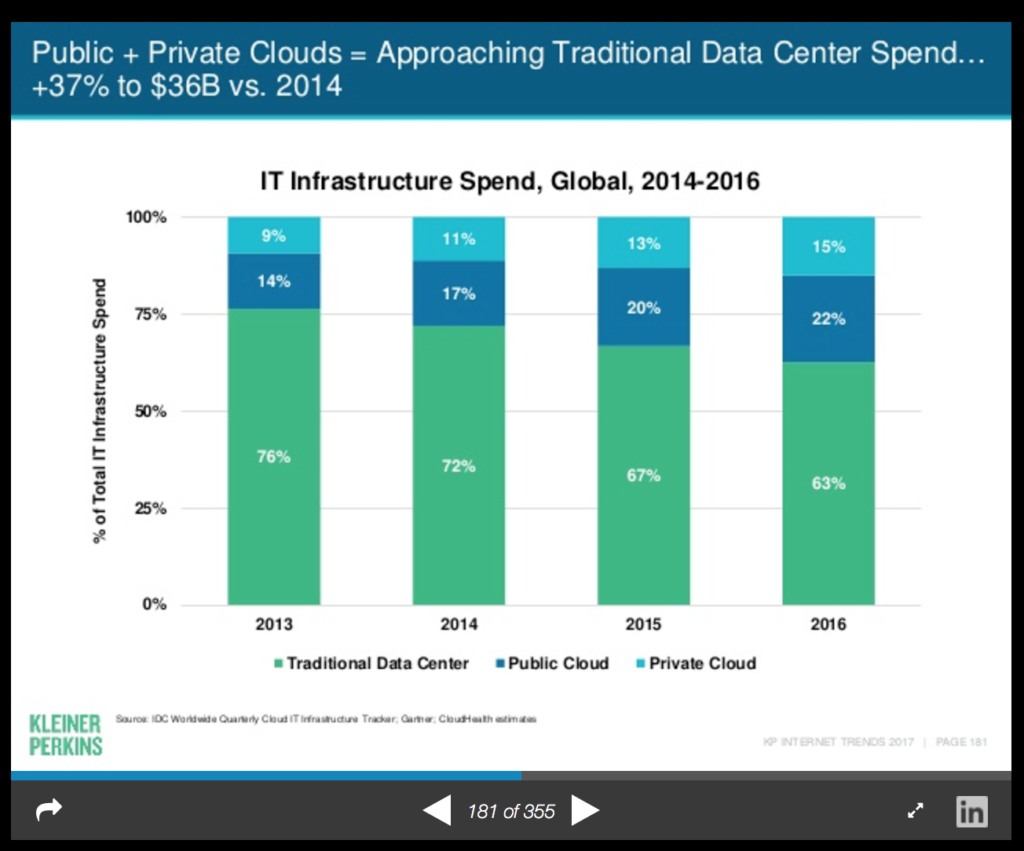 Do these numbers include shadow IT in the cloud, or does it reflect the concrete usage of cloud resources by the enterprise? There is a big difference between an organization deploying data center workload into the cloud vs. using a product behind the scenes partially hosted in the cloud, such as Salesforce. A different state of mind in terms of overcoming cloud inhibitions. 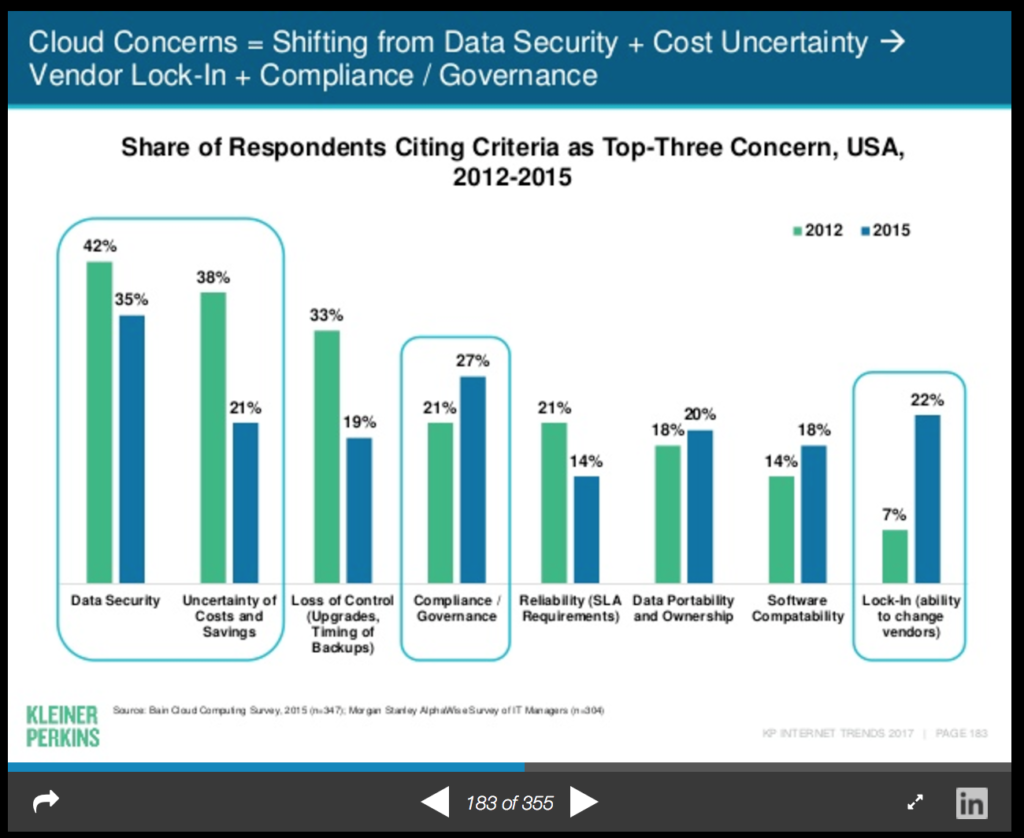 The reduction in concerns about data security in the cloud is a good sign of maturity and adoption. Cloud can be as secure as any data center application and even much more though many are afraid of that uncertainty. 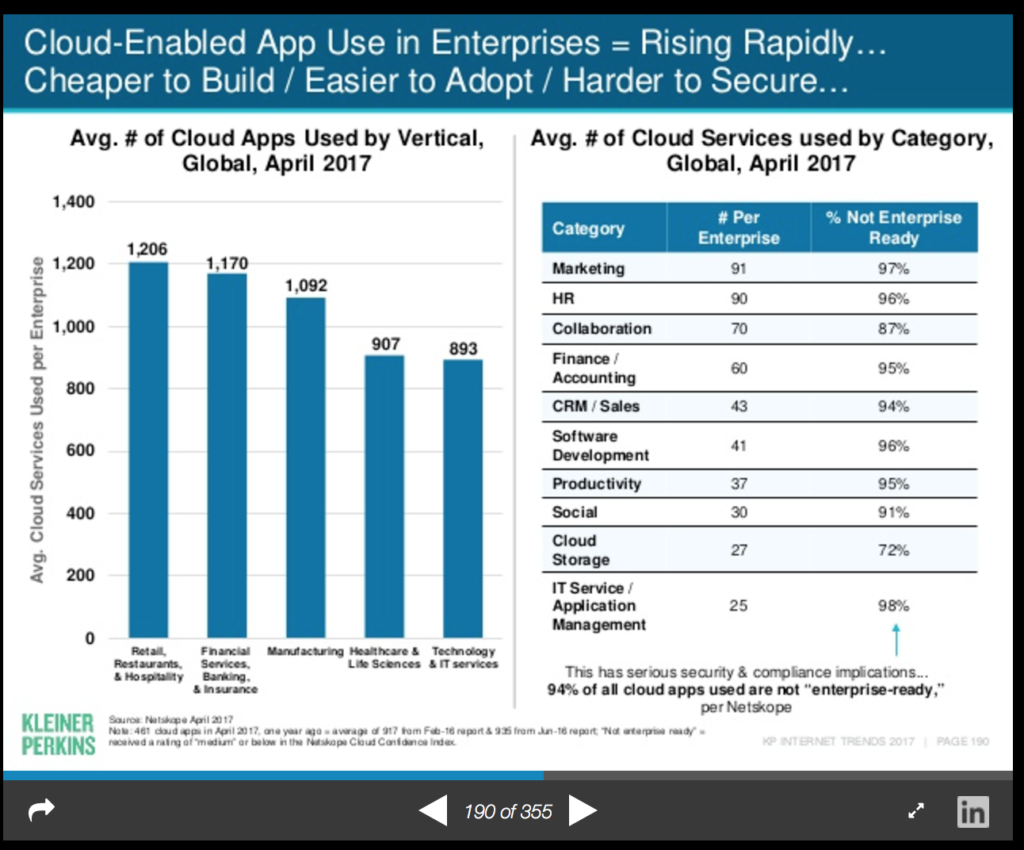 The reasons cloud applications are categorized as not enterprise-ready is not necessarily due to their security weakness. The adoption of cloud products inside the enterprise follows other paths such as integration into other systems, customization fit to the specific industry, etc. 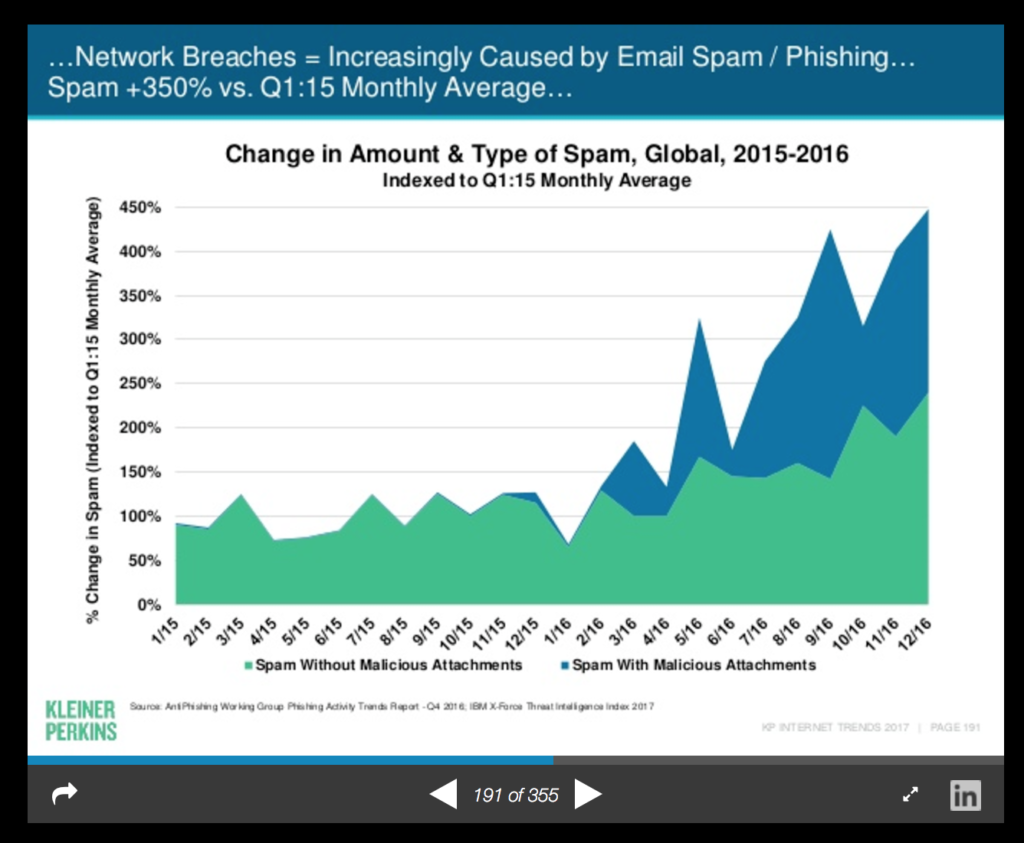 The reason for the weaponization of spam is simply due to the higher revenue potential for spam botnets operators. Sending direct spam can earn you money, sending malware can make you much more. 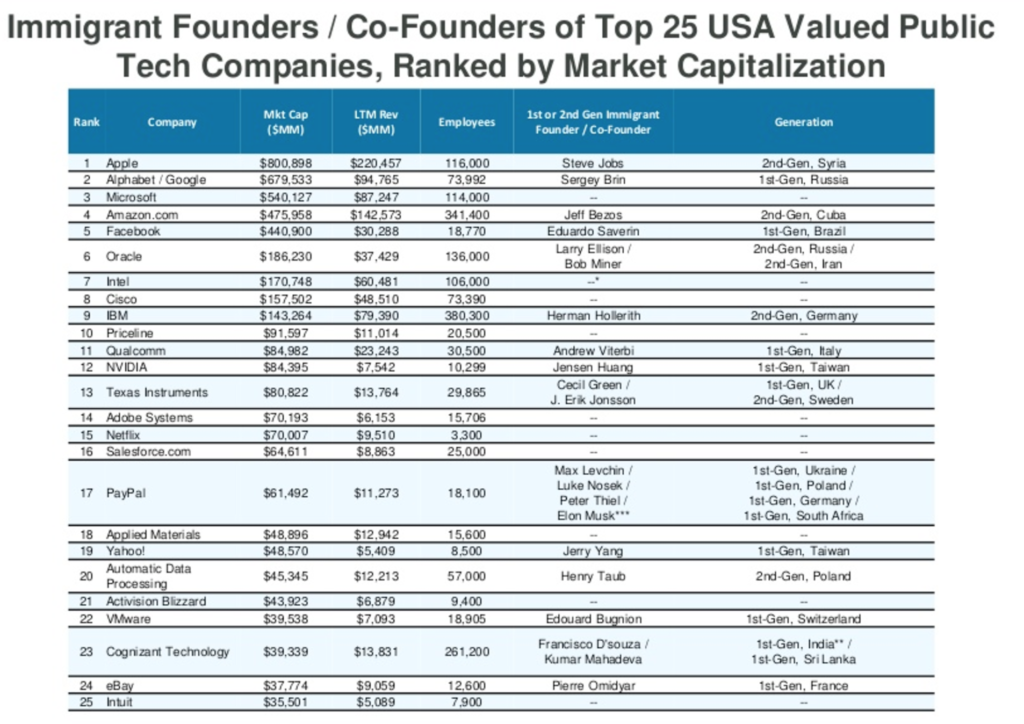 Remarkable to see that the founders of the largest tech companies are 2nd and 3rd generation of immigrants.

That’s all for now.

It?s not hard to understand the concept of proactive cyber defense: acting in anticipation of an attack against a computer or...

Cloud usage is increasing rapidly. Analysts forecast growth of 17 percent for the worldwide public cloud services market in 2020 alone. This...

The way online services are setup today implies that the only technical means to provide a more personalized experience to...

There is no large corporation on the planet which does not have digital transformation as one of the top three...