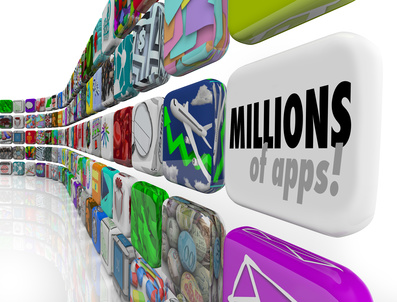 I am a big fan of apps! Both as an apps developer and as a smartphone user started way before the days it was even called a smartphone. I own several phones with all possible operating systems and never miss a chance to install any new app I encounter. I may be a major factor in the total 2011 downloads number in app stores:)

Following this self-proclaiming manifest and after I achieved credibility as someone who knows something about apps, I want to go back to the question in the headline. Sarah Perez story on the end of 2011 ?A Web of Apps started with the following lines: “It is remarkable to think that we?re in the early days of the app era when there are already close to 600,000 iOS applications and nearly 400,000 on Android (source: Distimo).”. For me, these lines assume a-priory that the number of apps will keep growing a lot, at least much more than 1,000,000 apps! a common notion nowadays.

I think that every person that is somewhat related to the apps industry assumes whether publicly or silently in their “heart” that this number will grow; otherwise, there is no much of an industry in it, isn’t it so? Of course one can argue that each app can “fatten” up and make more money on its own which means to grow vertical and not horizontal. In my eyes growing vertical after a hyper horizontal growth period is usually a sign for the beginning of a market saturation phase.

To put it in the right perspective, I personally do feel it will grow much more (I got to, I am highly invested in this assumption:) so let’s not start pessimistically:) even considering the mere fact there are so many others not using smartphones and many audiences not being addressed etc.. etc.. then we are ok, aren’t we?

To answer the question above I want to see if we can somehow establish our beliefs on some rationale that is at least discussable. Or in other words, at least something to help the ones who are highly invested in it to be able to get a good night’s sleep calmly.

I think mobile apps and their acceptance present a major breakthrough in the computing world and this happened only thanks to the fact that people actually “met” these apps and discovered their existence (thanks Apple for creating the first effective apps distribution channel). The point of convergence of “capable” computing mobile devices, with good enough to go network connectivity and dynamically loadable small functional units called apps actually created something amazing – the ability to “upgrade” yourself instantly. It always reminds me of the scene from the Matrix where Neo loaded up the Kung Fu learning software and in a minute he was a Kung Fu master. I know we are not there yet but the metaphor has been established. The ability to load new functionality on-demand on a computing device, which is actually your avatar since it goes everywhere with you, and then to be able to operate it is quite a leap from the user perspective.

So if we follow this line of thought then we can predict two trends in the apps world for the near future:

1. Apps will become narrower in functionality within time. We are actually witnessing this trend already where you can see every day a new app achieving a very narrow purpose. This won’t mean there won’t be a place for big “Photoshop” or “Office” like packages which are more like a wholesaler in a box, we will see those but they will not be the majority, not even close. This trend will occur simply because people have shorter and shorter spans of attention and more and more specific needs which can be answered efficiently only by something narrow enough and simple enough to learn and operate it immediately. In general, I put the “blame” for this trend on the low bandwidth we have available today for communicating with our phones and unless someone will invent a direct injection of new functionality into our brains we are stuck with the growing trend of simpler apps. Just to put it in context, narrow apps does not mean “dummy” apps. Actually, the narrowing of the apps happens in terms of explicit functionality while there is an expansion in the implicit dimension of making the app adaptive to the specific context of the user which enables easier operation of the suggested functionality. This adaptation may require more technological investment in the app then other explicit features.? For example, Siri has a very simple and narrow explicit functionality (she just listens and talks back with one button) while behind the scenes it holds a huge technological effort.

2. Thanks to the growing number of sensors and interfaces on mobile devices (and I know of few more developments in this area which are exciting) as well as the better connectivity options we will witness more and more human needs that will be addressable by apps. For example, the accelerometer which now assists people who run with their calculations and effort tracking, something that was not possible before this sensor was available.

These two trends point towards a growth horizon that is very clear that lies on the axis of the diverse set of unique and shared human needs. If we add to this equation locality, languages, gender, ages, cultures, religions, and other social grouping criteria then we run into a very big number. A number that is big enough to take us to the point where we will stop counting how many apps are out there in the very near future.

One question that I still haven’t got an answer for is in the title of the original story that got me started “A web of apps”.? The question is whether we can do a comparison to the growth of the world wide web. I know it is not necessarily what Sarah Perez intended to discuss in her story, which was more about potential apps discovery by connecting apps. Still, there are many talks about whether apps will grow in the same growth pace as websites did. Websites grew and keep growing mainly on the axis of topical interest or knowledge areas and from a gut feeling it feels like it represents a much bigger growth axis. Maybe more on this in a later post.

What do you think? Will it grow forever?